END_OF_DOCUMENT_TOKEN_TO_BE_REPLACED

There continues to be much controversy about deep sea ship traffic in the waters of British Columbia.  Environmentalists are concerned that when and if the Trans Mountain Pipeline is completed there might be one (1) additional tanker per day departing the Port of Vancouver. The concerns are twofold: safety and possible threat to the local Orcas.

Currently there are approximately 3200 deep sea ships visiting the port each year. That includes container ships, freighters, tankers and cruise ships. So that means there are around 6400 ship movements each year or  about 17  per day. Add another tanker per day and its 18 per day. At the same time BC FERRIES make approximately 124,000 trips per year and they are adding 2700 more. That will mean 358 ferry movements per day. To think one more deep sea ship per day will have a serious effect on the Whales is not a believable argument.

Consider also these interesting facts. In the narrow Strait of Gibraltar there are more than 120,000 ship movements per year. In the English Channel there are about 185,000 ship movements per year. In Singapore 365,000 ships come and go per year, 1000 each and every day. The Port of Rotterdam sees nearly 30,000 deep sea ships and 120,000 inland ships each year. 14,000 ships transit the Panama Canal annually.

It is my view that the concerns about the safety of ship traffic in our waters unfounded.

Finally, I tried the Local Texas BBQ stand for a little lunch today.  It was highly recommended by my brother, who lived in Texas for 16 years so has some reasonable knowledge of Texas BBQ. The food truck/smoker combo has been around Oceanside for several years but it took until today for a trial by me.

Texas BBQ is currently located on Highway 4A near Church Rd, across from the COOP.  A big food truck and a big old wood fired smoker is right there. You just pull up , walk over and order. Eat in your car or at one of several picnic tables provided.

Brisket is favourite of mine so Brisket on a Toasted Bun it is.  $10 for a very generous portion. A wide selection of sauces and other condiments are supplied and I chose the Texas BBQ sauce. The brisket was fall apart tender with a nice Smokey taste. Pretty darn good.  Depending on the quantity of sauce you deploy it can be messy, so take a bunch of their napkins.  Here is the Brisket. 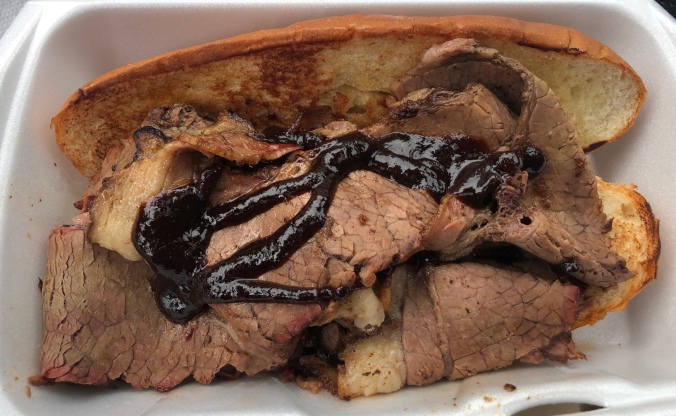 The menu is more extensive than expected. One could choose a Hot Dog, Burger,  Pulled Pork, BLT and even a Pulled Pork Burrito.  And pork Back Ribs too. Lots of sides to accompany you Sandwich including Potato Salad, Baked Beans and more. Of course, soft drinks can be purchased too.

If you love low, slow, BBQ, the truck is definitely in your future. They are closed Mondays but open weekends. At noon today there was a line up. Always a good sign of food goodness. 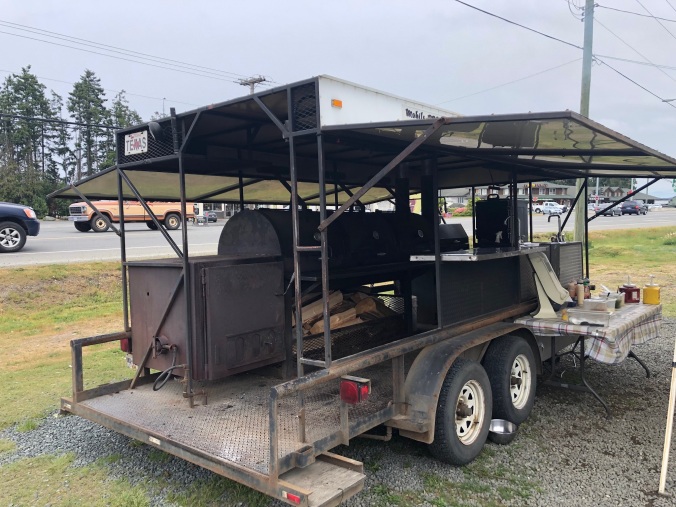 I’m thinking a pulled pork Burrito has my name on it next time.

It’s been a long time since I enjoyed a HOT DOG. Probably the last one was last summer. But I outdid myself this week. IRITEX, the irrigation supply company on the Alberni Highway had the Grand Opening of their new facility on Friday & Saturday. On site was the food cart of SMOKIN’ STREET DOGS and the dogs were free.

As it happens, I was in need of a few parts for the drip watering system so on Friday morning it was a quick drive up Church Road to Iritex. Twenty dollars for parts, then the Hot Dog. Fried onions? Yes please. Help yourself to mustard, relish etc. Thank You.

Of course mustard and relish found their way to my clean shirt. The Dog was delicious!  It seemed that on Saturday a few more irrigation parts were needed. Iritex, here I come. And I had another one. Two dogs on one weekend! Free!

SMOKIN’ STREET DOGS are a local outfit who sell Hot Dogs but also cater Festivals, Fundraisers etc. Beef  Dogs, Smokies, Cheese Dogs and even Veggie Dogs are available.  You can follow them on Facebook if you have a craving and want to know where the are dishing out the tubular goodness. This coming week they will be at Buckerfieds on the Alberni Highway.  Look for this cart. 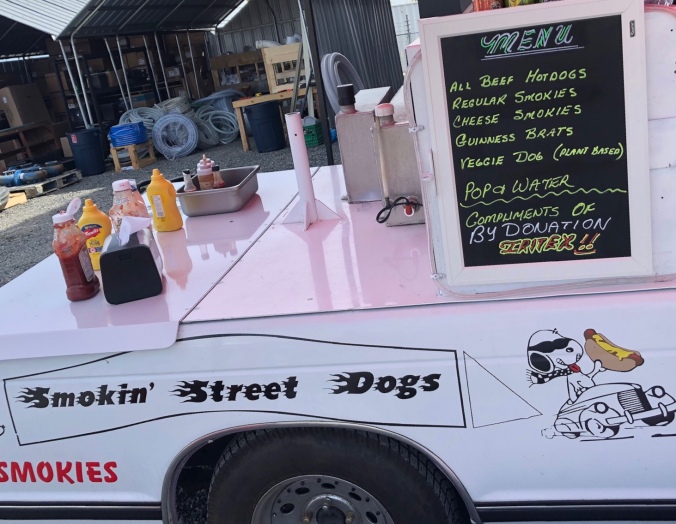