On Remembrance Day we are thinking about the thousands of Canadian boys who lost their lives in Europe during two Wars. Mostly we think of Dieppe, D-Day, the battle for Caen, the liberation of Belgium and Holland, Vimy. Many Canadians are unaware of the enormous role Canadian troops played in the liberation of Italy. Canadian forces fought in Sicily and mainland Italy in 1943/44 long before D-Day.

An outstanding book by Mark Zuehlke, ORTONA, chronicles the Canadian effort from their landing to through the famous Battle for the town of Ortona which took place in December 1943.

In Ortona today there is a small war museum which is loaded with all manner of Canadian Military memorabilia and well worth a visit. In October 2014 we sat in a lovely sidewalk cafe on Corso Victor Emanuele. It is a beautiful mall now with shops and restaurants. In December 1943 it was the scene of building to building fighting as the Canadians pushed the Germans out of town. 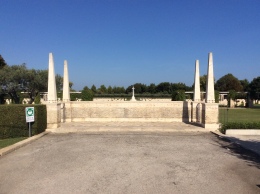 Just south of Ortona is the Moro River Canadian War Cemetery. We visited in 2014. You enter the Cemetery by driving through part of a church. Buried here are 1563 Canadian soldiers.

Further north near Rimini is the Gredara War Cemetery, where 1188 boys, mostly Canadian are buried. It’s on a hillside and looks across the valley to the historical Gredara Castle. My good friend Phil Clark’s older brother Bob is buried here. We visited his grave in 2012. 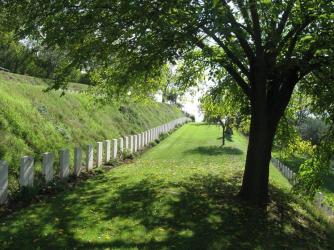 On the western side of Italy, the Allies landed at Anzio, south of Rome. The battle on the beach and later at Monte Cassino took a great toll. In the Beach Head Commonwealth Cemetery near Anzio there are over 2300 graves including 69 Canadians.

Not far from Anzio is The World War II Sicily-Rome American Cemetery and Memorial where 7,860 of American military war dead are buried. The majority of these individuals died in the liberation of Sicily (July 10 to August 17, 1943); in the landings in the Salerno Area (September 9, 1943) and the heavy fighting northward; in the landings at Anzio Beach and expansion of the beachhead (January 22, 1944 to May 1944); and in air and naval support in the regions. 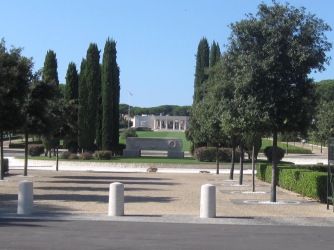 In POMEZIA, between Anzio and Rome is the POMEZIA German Military Cemetery. Buried here are more than 27,000 German boys who found throughout Italy. Each headstone has six names, three on each side. Visiting here was an eyrie experience. 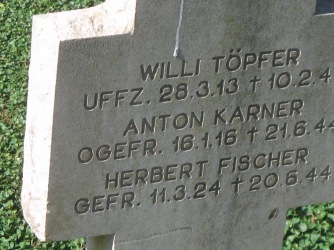 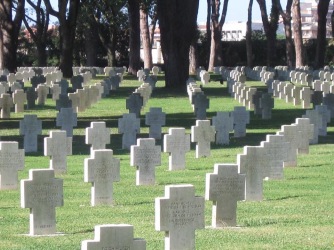 My thanks to our Roman friend, Carlo Giartosio, for taking us from Rome to Anzio to visit these historic sites

I encourage everyone travelling to Europe to visit some of these cemeteries. You will be glad you did.