Well, there is a new place to dine in Qualicum Beach. The building at 3298 Island Highway has been empty for more than a year. When it was built it opened as an Asian fusion place, then became of pop up, basically, as the couple that now run Realm in PARKSVILLE ran it for awhile. It just opened this week as BLACK BIRD SCHNITZEL HAUS Restaurant. It’s on the left across the road from the Shorewater Resort. 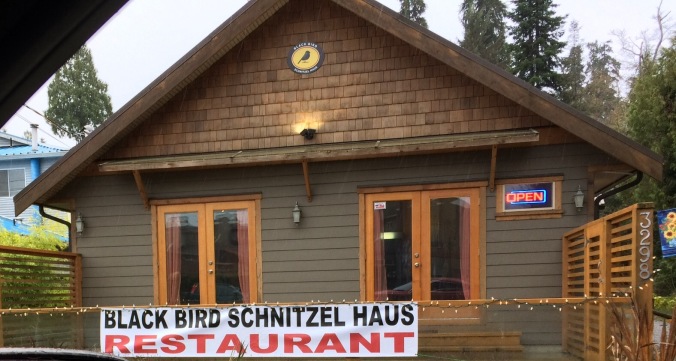 We have not tried it but did pop in to take a look and peruse the menu. The owners have given the room a bit of a Bavarian touch with dark wood tables and some artwork. Simple but quite nice

The menu looks pretty standard for a schnitzel joint with at least 20 kinds of schnitzel to choose from. They also have pork chops and other Bavarian items. Schnitzels are in the $18-20 range.  The cooler looked to gave a good variety of German Beer too

Black Bird is open for lunch and dinner Tuesday to Sunday and for breakfast on the weekend.

If you are itching to put on the lederhosen and tuck into a delicious schnitzel, this might be worth a try. No web site site yet.