On June 6 1944 thousands of American, British, Canadian and other Commonwealth troops landed on the beaches of Normandy beginning a battle to defeat Nazi Germany. The fighting continued through France, Belgium, Holland and eventually into Germany. The death toll was enormous on both sides. Here are some of the cemeteries where many of those valiant soldiers are buried.

The Americans landed on Utah and Omaha Beaches and the cliffs go Pointe Du Hoc.  The casualties were very high and many of those who perished are laid to rest at the Normandy American Cemetery above Omaha Beach. 9,387 American boys are buried here. It was the first overseas Cemetery we visited and is was an overwhelming experience to see the rows of white crosses.

A few Kilometers east is Juno Beach where the Canadians landed on June 6. Our troops fought their way off the beaches and into Normandy. They were in the Battle for Caen, Falaise and we visited two Beautiful Canadian Cemeteries in the area.

The Canadian War Cemetery at Beny-sur-Mer in Normandy is the resting place for 2,049 brave Canadian soldiers who landed at Juno Beach in June 1944. Most of these boys were between 18 -26 years old. We visited in 1998 and 2005.

On the road from Caen to Faliase in Normandy is the Brettevile-Sur-Laize Canadian War Cemetery. 2,782 Canadian boys are buried here. They fought in the Battle of Caen, and the Battle of the Falise Pocket in 1944. We visited this beautiful place in 2005 on the way to Saint-Lambert-sur-Dive near the famous ‘Coridor of Death’. 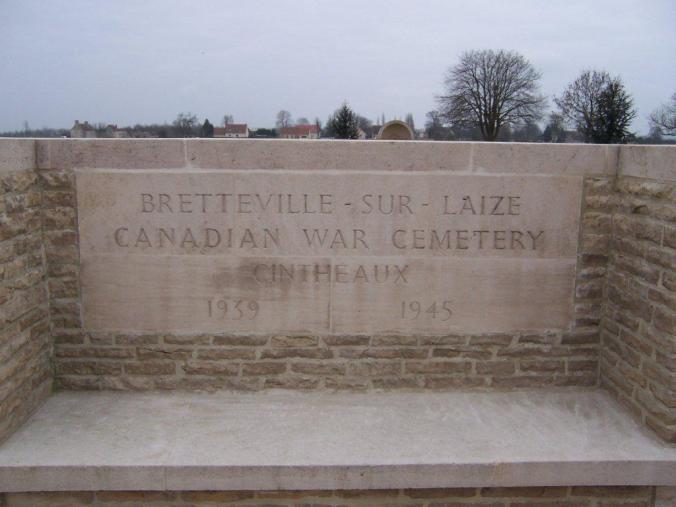