Day 42 and still sailing, the Vendée Globe fleet are now stretched out in the Southern Ocean between a The Cape of Good Hope and Cape Horn. 6600 nautical miles separate the lead boat and the 22nd placed and last boat. 7 skippers have retired from the race due to damage.

In the lead is Frenchman,  Armel LE CLÉAC’H, on BANQUE POPULAIRE III and he expects to reach Cape Horn by Christmas Day. 400 miles astern of him is Englishman Alex Thomson on HUGO BOSS. These two have experienced a few days of light winds in the Pacific. Holding on to third is Jeremie Beyou but he is some 1200 miles behind the leader. Armel LE CLÉAC’H has 9100 nautical miles to go. He has sailed almost 15,000 nm in 42 days.

The rest of the fleet, most of whom are still in the Indian Ocean have endured some wild weather. 4th place skipper Paul Meilhat radioed in after sailing in high winds saying “We can’t get around the low, which is moving along with us. Gybing in 50 knots is not something we want to do”.

Irishman Enda O’Coineen toughing it out and said,
“My most crucial issue right now is the computers and my navigation. I am back using paper charts and I have a GPS. I am trying to get my back up system working. I had a crash gybe and went on my side and did a lot of damage, nothing I can’t handle. It has been very, very cold and very, very wet. I have a confession to make. I have raided the Christmas chocolates. But this is insanity. A man on his own 500 miles south of Australia, battering 50kt winds. I’d rather be home getting the turkey ready. I feel a bit like a turkey voting for Christmas at the moment.” 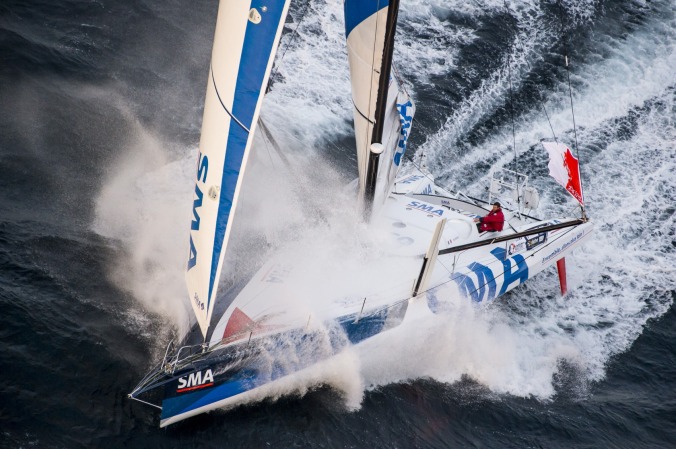 Usually, by this stage of the race, half the boats have retired. Only 7 so far this year. It’s quite an adventure but sailing a 60 foot boat, all alone, in 50 knot winds, hundreds of miles from shore is not my idea of fun! But it is fun to watch from shore.